We've already talked about how I am girly-impaired. No need to re-visit that topic.


But in the spring, when I can bust out my flip flops, there is one activity in which I allow myself to indulge. 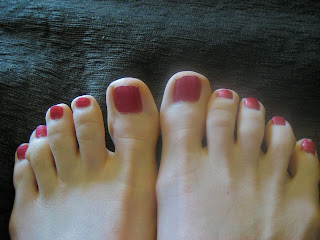 And there is something about looking down at my little painted digits that validates me in the most satisfying way. Nail polish is not functional. But it is feminine.


To the world at large these toes declare, "I am female."


Should you catch me without makeup or accessories, please do me the favor of looking at my toes. And be proud of me for asserting my gender. Even if it's on my feet.
Posted by Camber at 9:08 PM 6 comments:


Believe it or not, Isaac was the original mastermind behind this blog and the momentum that got it started. Camber gave only occasional cameo appearances.


Then life happened, things got busy, and Isaac decided to take a hiatus from blogging.


And Camber hated to see a good thing die.


I never thought I would grow to enjoy writing or blogging. It turns out blogging is different than  analyzing Charles Darwin or writing 10 pages about preventing falls in the hospital. Riveting as those papers were to read, I managed to write them only after a few all-nighters and a Costco-sized bin of chocolate-covered raisins (thanks, Sarah).


It took me a few years out of college to recover (both emotionally and from the ensuing chocolate buzz) but here I am writing without compulsion. And liking it. Thanks for reading.


For fun, I'm including some links to some of our favorite posts from the olden days that you may not have seen. You'll see that Isaac's hiatus is a true tragedy for us all.

We are all going to die by Isaac

The great electronics war and Isaac's rebuttal by Camber & Isaac

And a couple from Camber:


The Many Faces of Nebraska


The Perils of Changing the Subject
Posted by Camber at 1:23 PM 1 comment:

Forgive me, world, for posting something that's actually serious...


Infertile people always seem to have a lot to say about tact. It's fun therapeutic I suppose to point out all the tactless things other people say to make things worse. But I need that lesson on tact too, and it's taken me these four years to come to understand one pernicious phrase a little better.


We say it because it hurts to see someone suffering. We want to alleviate that suffering by pointing out that things could be worse. It's important to see the bright side, we think.


I completely understand this urge and have been saying this to people my whole life. I am all about looking at the bright side, finding humor in sticky situations, and trying to stay hopeful.


Here's the problem. Someone says this--completely meaning well and out of a sincere desire to be helpful--but it belittles the problem. Someone who had a miscarriage doesn't need to hear, "Well, at least you have another child." Yes, that's true, and it is great, but miscarriage is still sad. They don't need you to fix it or belittle the fact that they are mourning. (We have not miscarried--this is just an example).


Personally, I'd rather not hear about all the money we're saving because we don't have kids yet--I'd happily pay money to get them (which, it turns out, we are doing. Infertility isn't easy on the wallet...)


Here's another problem with that phrase. We may need to hear the bright side when we are complaining. Sometimes when I'm whining I do need a reminder to be grateful, recognize hidden blessings, maybe even find things to laugh about.


But it is not for someone who is mourning. Mourning is absolutely legitimate and natural, and a person can mourn a trial or loss or disappointment without complaining or being ungrateful.


I don't often wax religious on this blog (mostly because I don't often wax serious), but here's a good example from the Bible. Christ visits Mary and Martha after the death of their brother Lazarus. They great him with tears. And what does he do? Jesus weeps. He just mourns with them. He doesn't say, "Hey, at least I'm about to raise him from the dead." Even if he wasn't going to do that, he doesn't say, "Hey, he's going to be resurrected so you'll all see him again eventually." He doesn't tell them to quit crying or to feel better or even to trust in His redemptive power. He just weeps.


Then he raises him from the dead. He lets them mourn first. Interesting, no?


Sometimes when we tell someone "At least..." we are pushing judgment on them--saying that they are wrong to mourn, and that they have a bad attitude about their hard situation. We may be wrong on both counts.


Here's a recent example for me.


I had a patient which a leg with a nasty infection and some other problems. The surgeon came into her room and explained they needed to do surgery to get rid of the infection, and there was a good chance they'd need to amputate if the infection had spread too far.  I had to step out before he left, and when I returned, I found my poor patient with her face in her hands, sobbing.


And for once in my life I suppressed the "At least..." that sprang to my lips (took a lot of willpower, I tell you) and instead knelt down next to her and put my hand on her shoulder and just let her cry. I'll admit, a few tears sprang to my eyes as well (don't tell anyone, though, because I have a strict no-crying-in-public policy that I only break for emergencies). Sometimes, it's better to let someone hurt. But help them not hurt alone.


Three days later (after her surgery) I happened by her room and we chatted briefly. She was smiling.


She still had two legs.