I wasn't very good at having 2 kids. When Matthew was born Mary was 3 years old (3 is SO much worse than 2, am I right?) and Matthew was...colicky? Sensitive? Opinionated? He was by turns a happy and a miserable baby. Some nights he'd wake up crying every hour. We sleep-trained him probably 6 times. Mary loved the new baby and hated me for ignoring her. I felt exhausted and overwhelmed.

I couldn't believe ANYONE would choose to have more than 2 kids.

Then, about the time that Matthew turned 1, we both knew it was time for another.

Juuuuuust as having 2 kids was no longer horrible.


I spent pregnancy feeling guilty for yelling at my kids (I am very grumpy when pregnant) and using Netflix to babysit when I desperately needed to nap.

Everyone I knew said that 3 kids was their hardest number. After all the trauma of two kids, I knew having 3 kids was going to ruin my life.

It began with a mostly drama-free birth, on a Saturday 3 days after my due date. My body is ok at starting labor but always has second thoughts. Each delivery has been preceded by on-again, off-again labor, and this one was no different. Luckily I have a doctor willing to induce a VBAC, and so on this Saturday I went in to be induced, already 5 cm dilated.

I continued having spotty, mild contractions.

We increased my pitocin.

Then I glanced at the floor by the IV pole. Was that tubing tangled up underneath the wheels?

No, it turns out that the was the tubing with the pitocin, dripping onto the floor instead of into my arm. I wasn't having contractions, but the floor probably was.

Once that was fixed, I delivered in about 2 1/2 hours. I have never had an epidural and with the last two kids the pain was very manageable until transition. (With my first baby the pain was horrific from start to finish).

Then panic overcame me as the pain became unrelenting and it was too late to change my mind about the epidural! Blubbering and screaming ensued, and then, after pushing through one contraction, a baby was born, bringing profound, immediate relief.

"I'M NEVER DOING THAT AGAIN!" was all I had to say at the moment. In retrospect, she was by far my fastest and easiest delivery, with no complications at all.

We named her Grace Carolyn (Carolyn is my mom's name). 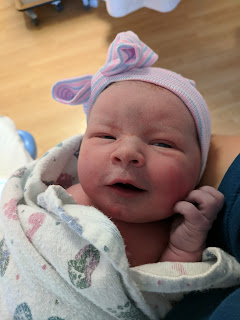 She slept so much those first weeks, that at one point my husband, mom, and I sat around fretting about the amount of sleep. That day she had been asleep the ENTIRE day except for eating (and then fell asleep at every feeding). We stared at the sleeping baby and asked each other, "IS SHE IN A COMA?"

We Googled, "Newborn is sleeping too much".

Turns out it's a thing, newborn sleepiness. She has since proven herself to NOT be comatose.

Grace cries...sometimes. When she's hungry or wet. She eats and sleeps like a champ, and my greatest fear is forgetting her somewhere because she's so quiet.

Here's the thing about having 3 kids. My older two kids can PLAY WITH EACH OTHER when I'm busy with the baby. Further, they're less resentful of the baby this time around because they're already used to sharing my attention.

I was already used to being outnumbered during the day, and used to taking extra time to get everyone into car seats any time we went anywhere. Adding a third child (who goes without any kind of fuss, thank you very much) hasn't been that much harder. 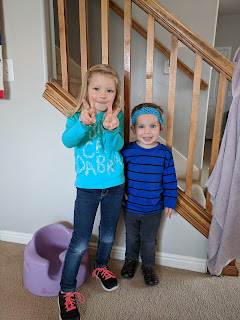 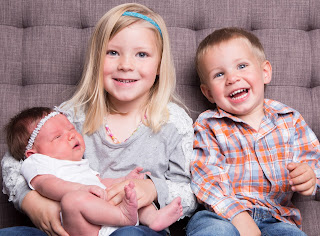 I've learned that the experience of parenting is different for every single parent. All I can speak to is parenting my 3 kids. It's great. 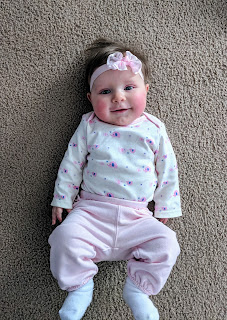 I thought a third child would be the straw that broke the camel's back. Rather, Grace is a breath of fresh air and my link to sanity. When mothering a 5 and 2 year old is too much, I take a moment to mother a newborn. A newborn that makes no messes, pushes none of my buttons, and gives me smiles that are straight from heaven.
Posted by Camber at 5:15 PM 5 comments: