A few weeks ago I passed a huge life milestone.

Sheesh, that is still a little surprising to see in print.

I made a goal long ago to never complain about my age. I hate it when other people do that. Why is it taboo to say the words, with head ducked in shame, "I am 53." That's not embarrassing, it's amazing! Some people never even make it out of childhood.

And yet, I found myself feeling a tad apprehensive about the approach of a new decade. Because, let's be honest, the 20's are some pretty good years. Most people are healthy, energetic, idealist, fun, and, often, a shade irresponsible. (Sometimes more than a shade).

I have found great comfort in reminding myself that other people I know/admire have also crossed this great divide. My parents. My two older brothers. Abraham Lincoln. Charlton Heston. I am not alone.

Aside from becoming a grown-up (and by the way I really feel like I should get a certificate in the mail or something, so I feel more legit), I'm not sure why we make birthdays harder than they need to be. Is it regret over lost opportunities of the past decade? A mourning for our fleeing youth? Jealousy for people that are younger are perhaps more attractive/skinnier/boasting fewer grays? Well, they will cross the threshold too. And then they'll be jealous of the younger people. It's a vicious, pointless cycle. As for my fleeing youth, I enjoyed being young, but I'm not sure I want to go back. I'm a better person now. I've learned stuff. My younger self kind of bugs me. I'd rather cut ties and move on as Camber 3.0.

Here is a rough photo timeline of my 20's. Digital pictures from college are a little scanty, because yes, I used film back then (gasp).


As for regret for lost opportunities of the past decade, there are lots of cool things it would have been fun to do (cruise, sky-diving, African safari minus the stampeding rhinos and risking exposure to a sketchy African disease, etc.), I also feel like I packed in a lot of great things:


becoming an EMT and volunteering with BYU EMS
picking a major
learning Spanish
studying abroad in both Mexico and Argentina
running a full marathon (without blisters!)
graduating from college and becoming an RN
marrying Isaac (awwwwwwww.....)
working as a nurse for 5 1/2 years
helping lots and lots of people in pain
causing lots and lots of people pain (usually with needles)
traveling to Hawaii, Disneyland, the beach, Washington D.C., Chicago, Nauvoo, and Boston
hiking lots of mountains
moving to the midwest
surviving a midwest blizzard
moving to Cincinnati
and, most exciting (after marrying Isaac), being pregnant


I'm not doing this to brag (although I am proud of picking a major. That was traumatizing) but to express gratitude for a chance to be alive 10 more years. Also it makes me feel like the last 10 years were productive.

Because mostly I just feel like they went too fast.
Posted by Camber at 7:18 PM 10 comments:

On grad school, moms, and pregnancy

World, no cause for alarm, Camber and Isaac are still here. And Camber is taking a studying hiatus to bring you this update:

I never thought this possible, but I stayed out of school long enough that now that I'm back, I love it.

I feel like everything I'm learning is so interesting. Being pregnant makes it more so. The other day I read a giant chapter on breastfeeding. After we had an hour lecture about what to do with a kid with a fever. Another day I learned the history of stethoscopes. Sometimes I don't understand why anyone would want to study anything else.

I have decided that studying to be a nurse practitioner will either make me a super mom, always knowing when to take my kids to the ER and when to tell them to cowboy up, or else it will make me a quivering bag of nerves, thinking through every obscure (and potentially fatal) disease that could be causing their sniffles. Considering how I've handled pregnancy, I'm inclined to think I'm doomed to the latter.

I've also spent some time comparing this experience to undergrad. So far the biggest difference seems to be that I haven't fallen asleep in class yet this time around. Even during 3-hour lectures. It's possible it has something to do with sleeping 8 hours at night now, instead of 5-6 like I did in undergrad...


Also, we are always happy to show off Aspen, who likes to pose as if preparing for a lovely back handspring. And then falls asleep instead: 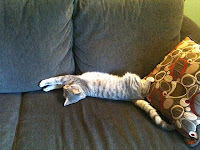 On pregnancy:
Today I am 28 weeks, 2 days and officially starting my third trimester. However, I have made a personal resolution not to waddle until I hit 8 months. Then I plan to waddle on purpose, whether I need to or not.

Also, I am highly entertained by the belly button transformation process. I'm about halfway there, and feel like I should be photographing this for what I think is great You-Tube material. I'm pretty bummed I thought of this 6 months too late, but for any readers that are contemplating pregnancy, you're free to use my idea (please give me royalties if it makes you rich).

Additionally, I hope no one who has hard pregnancies hates me for saying this, but I love being pregnant. I love feeling the kicking and water polo she performs for me (even though she loves to aim for my bladder lately. WHY?). I love having the chance to create a life. This may sound cheesy, but I'm grateful every day to be pregnant.
Posted by Camber at 8:13 PM 11 comments: