I am happy to report that the numerous fears catalogued in my previous post have proven to be unfounded.

Our baby boy is here.

He has a name.

His arrival started on his due date, as Mary's did. My doctor stripped my membranes and by that evening, my contractions were coming stronger and more frequently than the braxton-hicks I'd been having for weeks. I warned my sister-in-law about this before we went to bed, in case we needed to bring Mary over in the middle of the night.

A few sleepless hours into the night, with contractions continuing, I went downstairs to watch Home Improvement reruns and pace around in between contractions. When Isaac came to check on me, I told him to go back to bed and sleep some more, but he wanted to stay with me. So we watched Tim Taylor break stuff and timed contractions. An hour later we called my doctor, dropped a sleepy Mary off with my sister-in-law, and drove to the hospital, where I was 4 1/2 cm dilated. I was admitted and my doctor broke my water.

To this end, I didn't plan for an unmedicated birth, and looked forward to a nice, relaxing labor with an epidural when the time came. When I showed up at the hospital, however, my doctor told us that in almost 30 years he's only had 2 uterine ruptures, and with an IV in they could always put me under if an emergency C-section was needed. So I didn't HAVE to get an epidural.

It's one thing to get an epidural because, darn it, my doctor made me do it.

It's another thing to get an epidural because I "couldn't handle the pain."

And as I lay there in my hospital bed, watching yet more Home Improvement reruns (a movie seemed like too much commitment), contractions getting stronger, I kept thinking of how soon I could ask for the epidural. 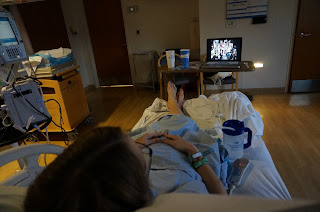 As it happened, my contractions started stalling a little, and they did have to start pitocin. But I still felt a little sheepish asking for the epidural. I told myself over and over again--next contraction FOR SURE I'm asking for one.

Finally, at 8:30 AM, only 6 cm dilated, and with the decision made to up the pitocin dose again, I meekly said, "Would it be bad if I got an epidural?" With such slow progress I was envisioning labor lasting well into the afternoon, and I hadn't slept a wink all night. I wanted a break.

Isaac said, "Well, sure, but I think you've got this!"

My nurse said, "Honestly, once we up the pitocin again, you're going to progress really quickly. I predict you'll be done in an hour, hour and a half tops. I think you can do this."

My spirits soared when she said this--I could be DONE in an hour? I decided to go for it unmedicated. What choice did I have, with that kind of peer pressure?

The problem was, I knew what was coming. In childbirth, things only get progressively worse as you go. I remembered from Mary that the baby only comes after you've already reached the point of pure despair, suffered the loss of all dignity, and wished for a swift death.

Believe it or not, it worked. The contractions were still intense but somehow the knee trick made them bearable, along with the deep relaxation and controlled breathing I was already doing.

I'll spare you the details of the final, ugly moments of childbirth. A nursing student came in for the birth and I told her, "I'm about to show you how unglamorous natural childbirth is." And it was terribly unglamorous. The final moments were just as despair-inducing as I'd remembered.

But he came, and despite a brief tense moment when it looked like his shoulders might get stuck, I was able to push him past that and out he came. The first comments I heard were, "Wow, he's chubby!" 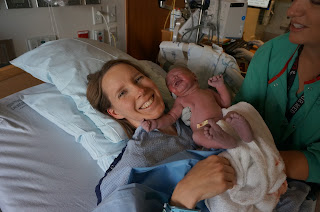 And he was--all 8 pounds, 2 ounces of him. We were, honestly surprised by this--I measured small my whole pregnancy and never showed all that much. Mary was 7 pounds even. To this day I don't know where I was keeping that baby. 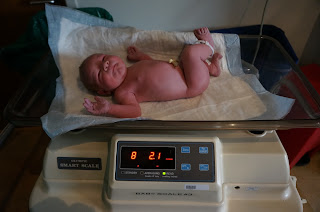 He was crying, he was chubby, I was out of pain, and everything about it was different than Sarah's birth. I snuggled him right up to my chest and just loved him and his healthy self.

As the birth approached, I found myself leaning towards the name Matthew, because it means "Gift of God." I could never commit, though. Perhaps I was waiting to see if he would be okay. But moments after birth, when Isaac asked if we could pick a name already, I just wanted to name him Matthew. Our gift from God.