The long and short of it is, I have FINALLY made a decision about school.

My reluctance to write comes partly because I knew that, whichever way I chose, approximately half of my readership would secretly disagree with my decision.

And my reluctance comes partly because I know that, whichever way I chose, approximately half of my brain would secretly disagree with my decision.

But I, despite my pathetic indecision, have decided to go to school.

Could someone in a very similar situation to me face the same dilemma and make the opposite choice? Yes, and I'm sure it's happened many times. That's partly why I hated making this decision so much. I'm the girl that loves multiple-choice tests, not essays. I want the answer to be right or wrong, no arguing an absurd opinion (sorry English majors).

Did I decide to do this because I think being a stay-at-home mom is a waste? No, I sincerely hope not. In fact, I read a really great blog post by a friend that almost made me change my mind about school, because she talks about how it is okay to stay at home. And if my sole reason for going to school was because I felt like staying home wasn't enough, that it was a waste, then I would be going for absolutely the wrong reasons. I believe that is absolutely the wrong idea to have about motherhood.

I love and respect many, many women that have made tough choices about careers and education and decided that for them, the best decision was to stay at home, at least for now.

Yet, because my program is so flexible, I don't think that becoming a mother, and trying to be a good one, and going to school, have to be mutually exclusive.

After I had made my decision, and was still thinking daily "Maybe I shouldn't go...but maybe I should...it's not too late to back out..." I read a couple of articles from a publication by my church that offered a really helpful perspective to me and helped confirm the decision that I had made. One is an address directed at young women ages 12-18, and another is by an apostle (at the time) of our church to everyone. These reassured me that the things I'd been feeling and thinking about my decision were right.

That said, I've told my parents to check with me on the first day of class. To see if I actually went through with it. Because there's still time to back out...
Posted by Camber at 12:59 PM 14 comments:

For those unfamiliar with midwest geography, the great city of Cincinnati lies right on the river that marks the border between Ohio and Kentucky. This makes downtown Cincy easily accessible from northern Kentucky, where many choose to live.

I have crossed many rivers in the midwest. Crossing the Missouri from Nebraska into Iowa, for example, brings... more of the same. You know, cornfields. Same with crossing the Mississippi from Iowa into Illinois.

But crossing from Ohio into Kentucky feels dramatic. Like somebody should be asking to see my passport, maybe. And then searching my car for drugs or fireworks.

On the other side of that river, suddenly people speak with drawls. You see more tattoos and fewer...sleeves. The line at the grocery store moves a little more slowly because the checker is telling the person in front of you about their deceased father and then about the fatal accident that happened "right out at that light" several months ago (true story). You start to notice restaurants with names like "Bubby's BBQ" (true story), and people will tell you their life story if you ask their name (also true and yet rather endearing).

Kentucky is famous for the Kentucky derby: 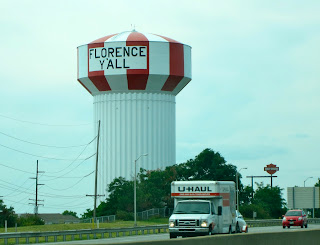 And it's also really beautiful. Beginning in Kentucky, the landscape changes from flat farmland to hilly and densely forested. It also has 50 state parks, one of which we visited the other week:
This is Cumberland Falls (hence the falling water in the picture). Yes, it was hot and muggy (we keep forgetting that going outside in June or July in the midwest is usually a sweaty mistake), but it was just so beautiful. There was water. And green stuff. Both novelties to westerners like ourselves. 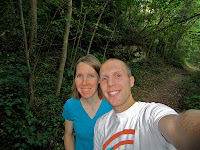 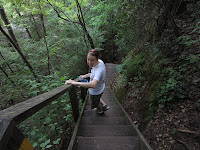 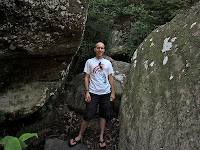