I think it's important to have a positive outlook on life. I'm trying to focus on the good stuff right now.

So I'm not going to mention the abominable heat and humidity wave that is keeping me as housebound as I was in the dead of winter.

And I wouldn't dream of bringing up my four mosquito bites.

Or the fact that my body is trying once again to switch back to Central time from Tokyo time (or night shift time).

Nor could I ever be so heartless as to complain about the confused old woman I had the other night that screamed the f-word at me while I tried to draw her blood and put in a urinary catheter.

And of course this would be the last place I would ever mention how some of her urine splashed on my face during that process.

And because none of that was worth mentioning, I also won't bring up her reeking gangrenous foot ulcer.

Since I'm not brining any of that stuff up, instead I will show you what I found on my doorstep when I came home after the urine-splashing incident:


Also on that doorstep was a thank-you note from my neighbor, which I have no picture for but which probably made me equally happy.
And this is what my rock star husband sent me for the 5-year anniversary of when we started dating: 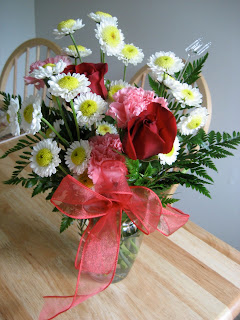 Other good things in my life:
-A trip to Nauvoo to see the pageant and Carthage with two old roommates and a very cute baby
-Free ginger cookies at the bakery during the afore-mentioned trip
-Isaac's internship countdown: only 9 days until he comes home!
-I'm in Chicago visiting him right now anyway
-I have two nephews on the way
-And the mosquito bites are healing nicely. Thanks for asking.
Posted by Camber at 9:47 AM