Get out of my forest

Last week we went camping at a lovely state park with our friends Jershon and Shelly. Well, sort-of camping.

Because during that fateful night, we learned about the dark side of the woods.

It all started when we arrived at the park and started unloading the car, and heard a dismayed "Oh no" from our friend Jershon.

"I forgot to pack our tent."

We quickly assessed the damage: four adults and a toddler and only one 3-person tent.

We discussed our options: driving home--no way. Sleeping in the car--too small. Isaac and I sharing the tent with the toddler--Um, no thanks.

Finally we decided that our friends would take the tent along with their toddler, and Isaac and I would sleep under the stars. It promised to be a clear night without rain. 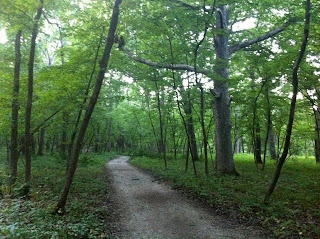 It sounded romantic. Just us and nature. And the air mattress.

And for awhile, it looked like we were in the clear. There weren't even a lot of mosquitos. We had a campfire, roasted s'mores, and talked until well after dark.

It was a lovely, relaxing night. Until we saw the eyes.

They reflected an eerie red from our headlamps, and lurked near our bed at the edge of camp. Then one pair of eyes became two, and then three. Then they went for the food, and we realized our creepy red eyes were three raccoons. Three really, really bold raccoons.

We decided it was a good time to change our sleeping arrangements. Under the stars? Vetoed.

We began quickly gathering our food before the shameless raccoons started fighting us for it. And then I was all but attacked by three jumbo-sized daddy long-legs. I no sooner killed made Isaac kill one before another one surfaced. We made a beeline for the car, a five-minute walk down the trail.

At the car, I was struck again by another reality. It's impossible to sleep well in a Chevy Malibu. What a stupid idea! What do you do, recline the seats and try to sleep with your legs hanging off the end and your head at a 45 degree angle? And what about the middle console waiting to whack you should you have the gall to try to turn over?

On to plan C: Get a hotel. I told Isaac this. His eyes lit up, hopeful. This night could be salvaged!

I whispered, "Isaac, Jershon and Shelly never have to know!"

Because I'm sure they wouldn't notice us showing up the next morning looking...clean. And well-slept. With powdered sugar on our lips from those delicious donuts at the hotel breakfast. Isaac whipped out his iPhone and found a hotel. Thinking better of it, we went back for Jershon and Shelly after all.

As it turns out, selling Shelly on the hotel was not difficult. The raccoons had been hunting them. Jershon stared one down, and while it stared back, unmoving, the other two started to close in from the sides. Just like raptors.

So we grabbed our clothes and toiletries (and the toddler) and left for town. Once in the hotel, we slept like babies. Civilization never looked so inviting as it did that night. No raccoons. No daddy long-legs. No mosquitos. And that beautiful, beautiful flushing toilet.

In the morning we ate a hot, free breakfast at the hotel and drove back to our campsite, the tent waiting for us as if we'd never left.

We all go camping perfectly willing to share the woods with a few select species: deer, squirrels, and butterflies. The problem is, there are other creatures in that forest we'd rather not think about. As long as we don't see them, we can pretend they're not there.

But that night we saw them. And then we ran back to civilization like the wusses we really are.
Posted by Camber at 3:05 AM