I thought about blogging about it all:

Our trip to Utah

Our trip to Arizona

Our trip to Yosemite that never happened (really sorry, Dave, Merry, and Jason)

Our return to Iowa and flurry of getting ready to move (THANK YOU movers! And thank you Isaac's job for that beloved relocation package!)

Our move to Cincinnati

But honestly, who wants to hear all those details? Maybe I'll post a few pictures in weeks to come.

All I really want to blog about is Roy:


Let me first explain that Roy is the name of the fetus, not the baby. Nor do we know yet whether we are having a boy or a girl. My mom named the embryo back when she saw what the baby looked like around 7 or 8 weeks: 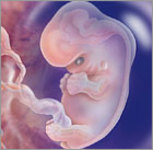 With short arms, big head, and a tail, she thought it was the spitting image of Roy, the T-Rex from Dinosaurs, the old sitcom our family used to watch: 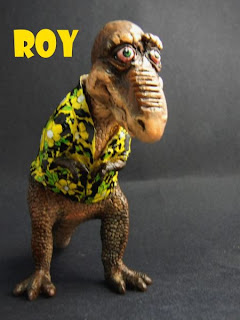 See the resemblance? So the name stuck, even though the fetus looks, um, human now.

Strange names aside, there is a lot of joy and rejoicing in our house. I have had over 150 shots during this process, and while we have to admit that reproduction is not our forte, we're both pretty handy with a needle and syringe now.

And because I have been quietly supporting the home pregnancy test industry all these years, taking failed test after failed test (probably about 20-25 of them), once we had a positive pregnancy test from the infertility doctor, I decided to take one of my own. Even though I knew I was pregnant, I still had an irrational fear that the stupid test would still be negative. But it wasn't. Take that, First Response!

I used to think, when I'd imagine what it was like to be pregnant, that the first trimester would be all butterflies and happiness and, probably, vomiting. For me, it was none of those (including the vomiting) as we worried about miscarriage, worried about whether or not I should still go to grad school, and then panicked when I had two episodes of bleeding which led to blubbering on my part and stressful trips to the doctor for ultrasounds.

This happened on our trip to Utah. I was also ordered on an activity restriction by my doctor. Hence the cancelled Yosemite trip (*sniff*).

Once out here and finally able to see a regular OB, we went in for our first office visit, and even at almost 14 weeks he couldn't hear a heartbeat. He listened for a really, really long time, then looked at us gravely and suggested we get an ultrasound as soon as possible.

You keep stressing us out Roy! We spent an agonizing hour waiting for the ultrasound, and as soon as the screen popped up, there was our cute little guy (or girl), heart beating away like nothing was wrong, and even rolling around and hiccuping.

Then the stress faded. And we fell in love. 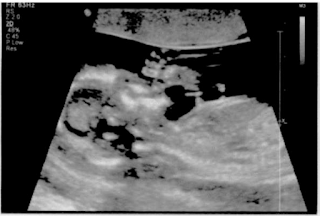